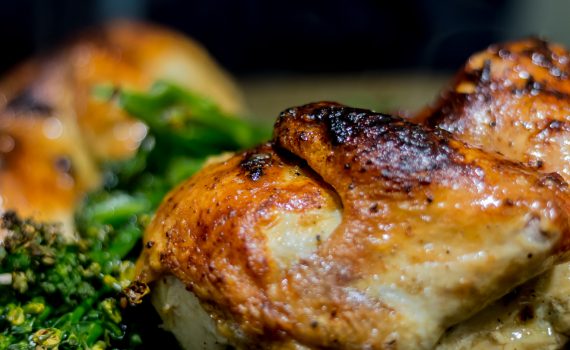 Last weekend we caught an episode of The Barefoot Contessa on Food Network. I know it's a stretch of the imagination, but she featured yet another take on roast chicken. This time featuring Chef Dan Silverman's Million Dollar Chicken from The Standard Gill in New York City. After a rained-out attempt at a grilled chicken, we thought we would give this a try. Here's the full recipe: http://www.foodnetwork.com/recipes/the-standard-grill-million-dollar-chicken-2145489 .

We deviated slightly right off the bat. Chef Silverman stuffs the cavity of his chicken with lemon, thyme, garlic, salt, and pepper. Kevin already had the bird halved down the middle, so stuffing it wasn't happening. Instead, we just seasoned the outside with salt, pepper and garlic powder and a good coating of olive oil. Then into a pan on top of a couple of slices of challah Kevin made yesterday (you all have fresh made challah in the kitchen, right??) 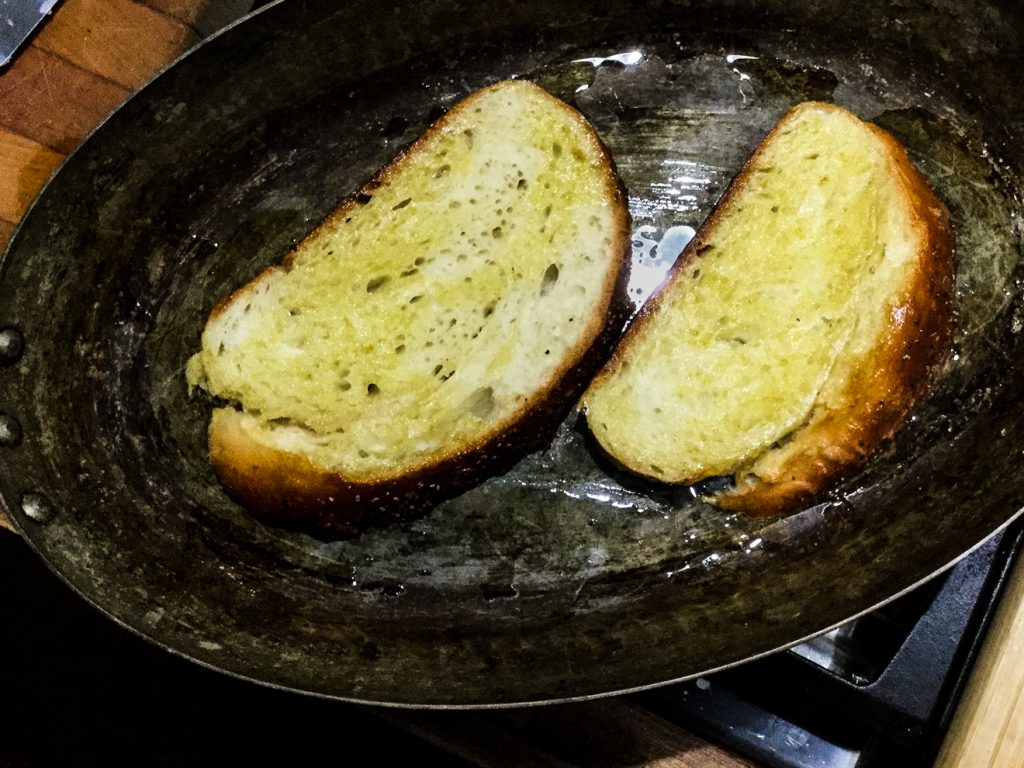 We got the oven heated up to the prescribed 450F then into the oven with the bird.

Meanwhile, we grabbed the crème fraîche from the fridge (we were surprised to find we actually had this!) and added the lemon zest, lemon juice, Allepo peppers, and grated shallot. It sat patiently until the chicken was almost done in the oven. The recipe mentions basting every 12 to 15 minutes. However, we didn't have enough drippings in the pan to do so until about the half-way point. At the last basting (about 1 hour in) we through in few stacks of broccolini to roast so at to have a little green with our dinner. 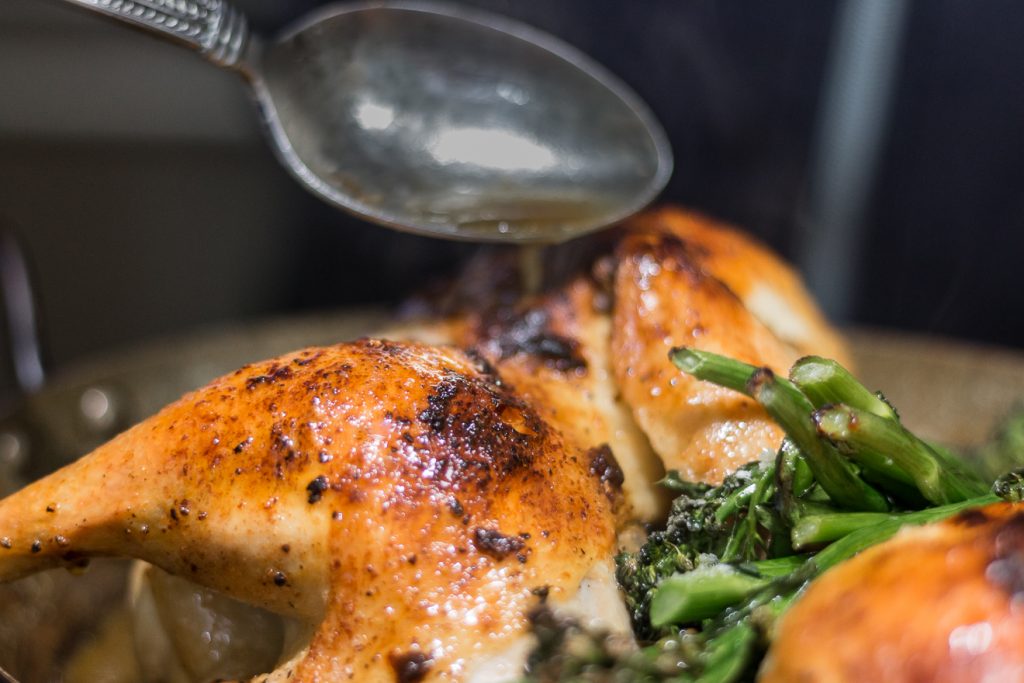 At one hour into roasting we removed it from the oven and coated it with the crème fraîche mixture and put it back in the oven for 10 more minutes as instructed. 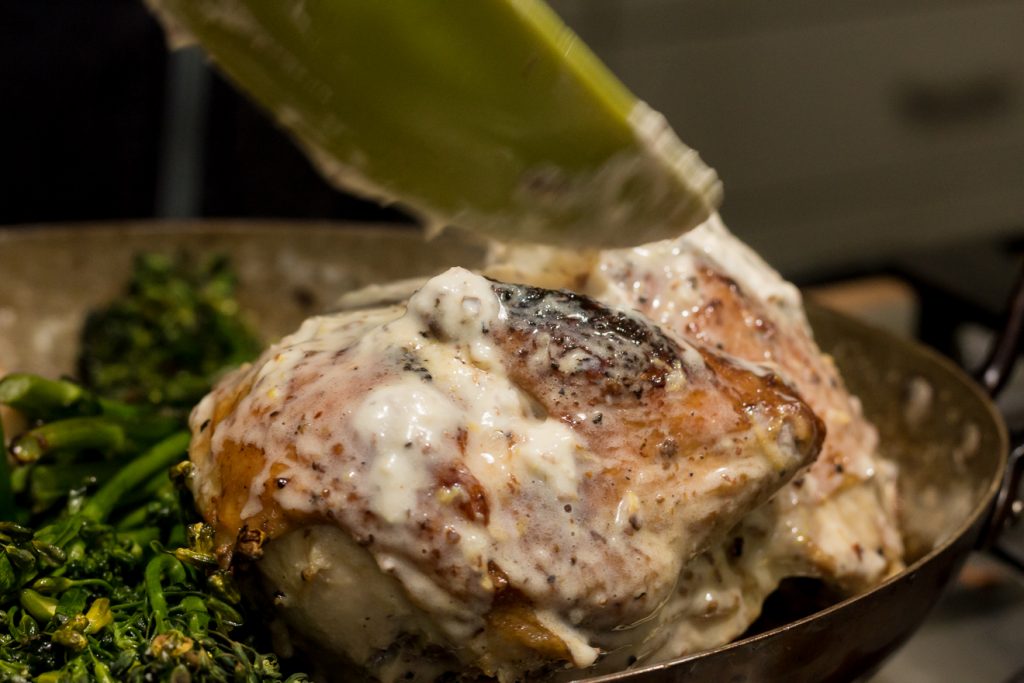 While the chicken was in the oven, Kevin made some stock from from left-over chicken parts we found in the freezer. After a little simmer we had fresh stock to make gravy to pour of the finished bird. 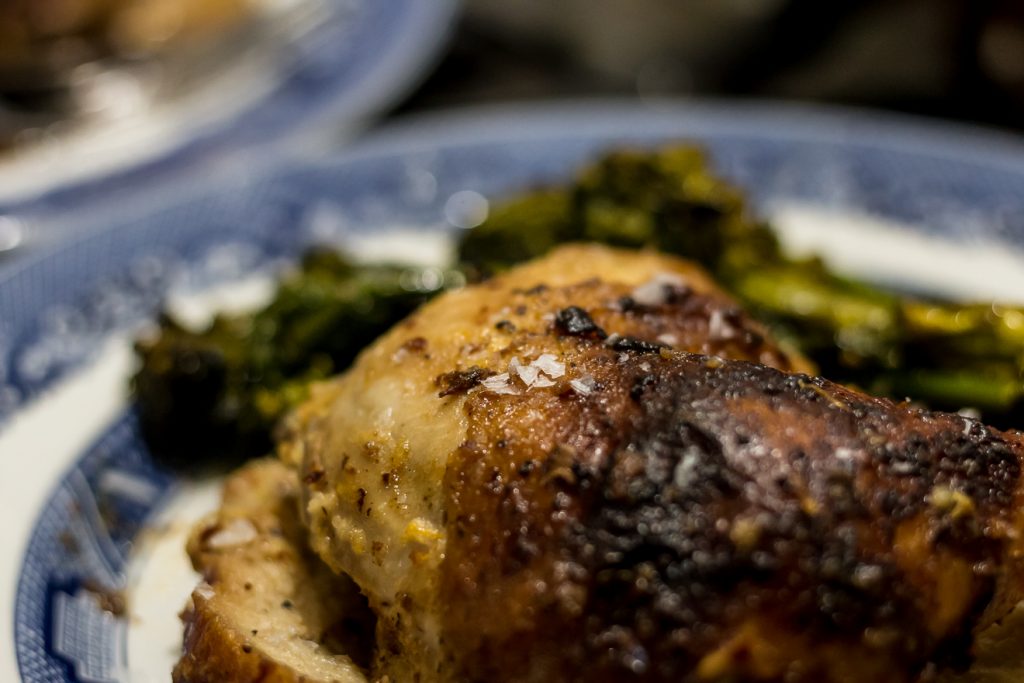 The chicken turned out with tons of flavor. As of this writing, we haven't tried the breast meat; we both had a leg/thigh quarter tonight. we look forward to trying the breast mets.

About the bread: in Ina's video with Chef Silverman, the bread comes out toasted on both sides. We're not sure how that could happen. The chicken releases a  lot of juice as does the crème fraîche. This resulted in bread that was soggy on the top and toasted on the bottom.  We think they don't show in the video is either: the bread is turned over sometime during cooking or is toasted on the other side before serving. In any case, we enjoyed it as is. It may be a little too greasy for some, but it tasted like stuffing that could have actually roasted inside the chicken (kinda like a turkey stuffing). Yum!

Give a try - we really enjoyed it. Let us know how it turns out for you.

Thanks Ina Garten and Chef Silverman!

Love Ina and her Chicken recipes. Also really enjoyed her show about roasting veggies!!!!!!!!
Thanks!

well, I just finished my good dinner of Smart and Finals oven roasted whole chicken. I’m sure that your chicken was much better, but I don’t have any cooking implements to clean. I’m really glad that you can find enjoyment out of making your dinner. Also, Smart and Finals chicken is better than Vons(Pavillions) or Ralphs(Krogers)