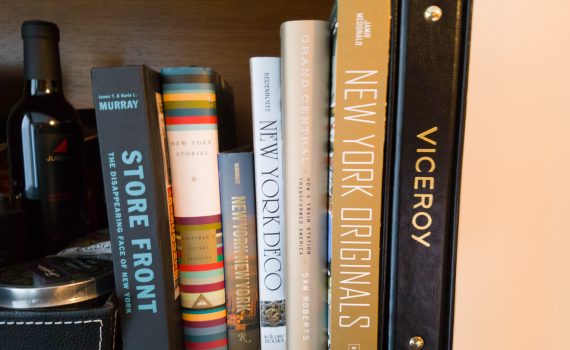 Opened in 2013, the Observer (Kim Velsey, 10-10-2013) described the Viceroy as “Soho with a killer view of Central Park, new construction with a mid-century aesthetic, masonry with a soaring glass facade.” And that pretty much captures it. The chic vibe extends from the moment you approach the doorway where you are greeted with ‘Welcome Home’ (actually sounding genuine BTW), to the compact check-in area (our room wasn’t quite ready, so the GM comp’d us two cocktails at The Roof), to The Roof bar (more later), to our room. I have to say, the entire experience was congruent. I know that’s bit of an odd expression for describing one’s stay at a boutique hotel, but the term, like the experience, fit. See also this other write up on The Observer.

In the same Observer piece, Viceroy CEO Bill Walshe said of the crowd the hotel hoped  to attract: The “Viceroy’s guests tend to be on the younger side: successful 25 to 50-year-olds in the entertainment and media worlds whose parents might have stayed at the Carlyle but who want something a little more modern for themselves.” Having stayed at both the Carlyle and the Viceroy, I’d say they hit their target audience on the money, so to speak. After all, the Viceroy isn’t the least expensive place you could stay in the area ($175-800/night), but by no means is it the most expensive either. And yes, the tenants seemed to be just as he predicted. 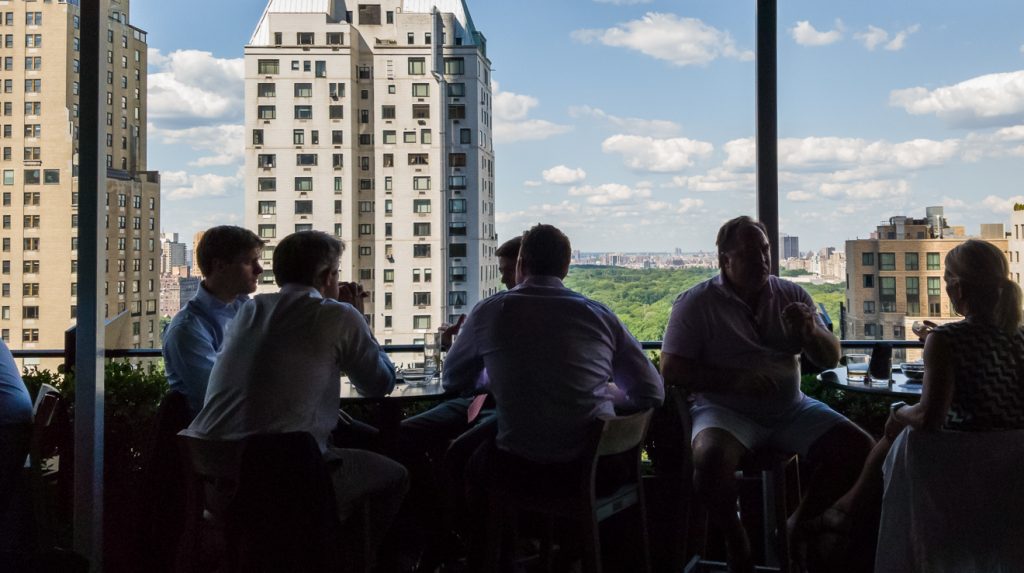 Located on the 29th floor, getting off the elevators you enter the lounge and bar area proper. Warm tones, leather and wood – elements carried throughout the entire hotel. This is the place you’d want to be on an inclement or blustery winter’s night in the city. Turn right and The Roof terrace opens up to an unbelievable  panorama view looking north into Central Park.  To the eye, it seems like the luckiest of coincidences that there just ‘happens’ to be a straight, uninterrupted shot looking north through a narrow passage between flanking, hulking skyscrapers to the East and West. The park is there almost to touch.

We had our two complimentary cocktails…oh, who’s kidding…we had a few…and a charcuterie plate before we had to get to the room a prepare to meet friends out for dinner. Keep in mind, we had arrived a bit early, probably 4pm, so the Manhattan crowd of 20-50 somethings had yet to be set free from their offices and crowd the terrace. For a while, we had The Roof almost to ourselves, sans a few squeamish guests afraid to go over to the edge and peer downward. What a great way to kick off our evening in the city before heading out on our voyage aboard the recently ‘remastered’ QM2. We returned to The Roof after dinner for with Kevin & Charmaine for a nightcap after dinner. By this time, though still early by NYC standards, was already getting crowded - many of the prime tables and seating having been reserved. 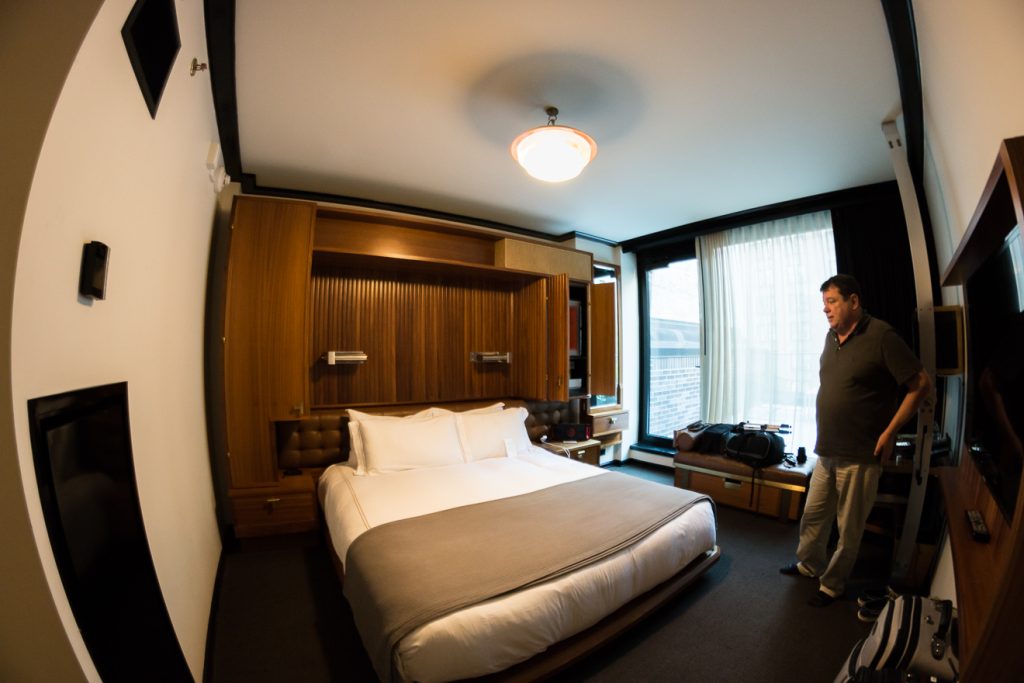 We had a terrace room on a lower floor, so the view wasn’t nearly as crazy good as at the bar, still, quite a nice surprise in Midtown, in the midst of Millionaire row. The room was updated 60/70’s, stylish, tasteful and comfortably sized. The linens, crisp, white with boarders stitched in gold played off other elements in the room and bath. 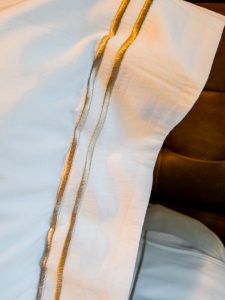 Nothing was left uncurated, but it didn’t quite seem as though Disney had come in and designed the place. The bath was unapologetically clad in marble and brass, a combination that is making a long-overdue come-back.  Masculine and  welcoming. We’re taking back the brass and marble décor scheme and making it our own! The ideas are percolating for our master bath 🙂 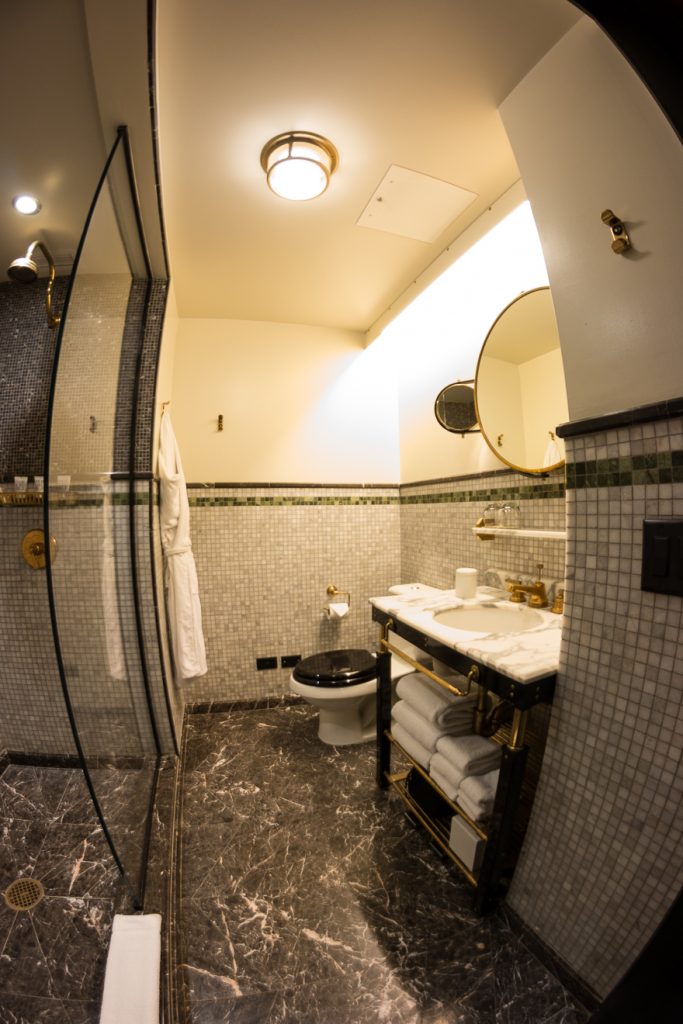 The Vicerory, Midtown or Central Park, where ever you want to place it, is definitely worth it. A wrap-around sense of being looked after, thoughtfully anticipating needs, in a smaller scale luxury setting.  It’s clear that the owners of the Viceroy want to cater to the new, young wealth so obviously present in this part of town, but don’t be dissuaded if you’re like us, in our 50’s and appreciative of style while also being cost conscious. We booked far enough in advance to get a very good price. Their website notes certain discounts for advanced reservations. Take advantage of that. We will be back ‘home’ for sure some day soon. 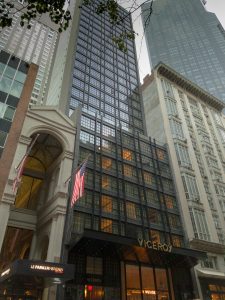